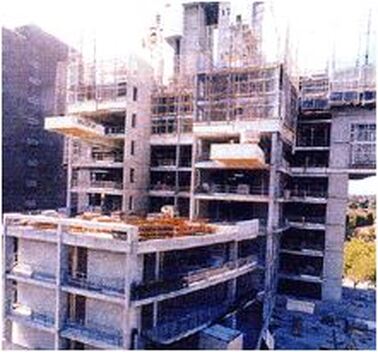 The photo above shows Aurora in mid construction. To lots of people I am sure this is just a photo of another building site. But to me and I hope to those who now enjoy living in one of best apartment developments in Melbourne, it represents much more.

For those living in the Aurora, it is the early construction of what is now our home, our residence and even perhaps, our sanctuary. It is where we invite our friends, where we live a great portion of our lives and also our home always says something about who we are as individuals.

But to me, this photo represents the building of a wonderful dream. I originally purchased the two sites that were to form the location of the future Aurora on the 22nd October, 1996. At the time this was a slightly brave thing to do with the intention of building a residential development as the residential property market was still coming out of a slump due to rising interest rates in 1994 and 1995. Also of course, St Kilda Road was known as a primarily commercial office precinct.
​
Upon buying the development site, the first decision to make was whether to build a fairly bland and cheap residential development, the "square box with flimsy balconies" style or do something special, a cut above the rest ofthe market.
There was one major residential developer in Melbourne that particularly specialises in the cheap end of the market. Most of their developments have the same square, bland, cheap and nasty look about them. I believed that this was an inadequate design solution for such an outstanding location.
​
It was at this time that I was also lucky enough to meet one of the really great architectural designers here in Australia, Nigel Fitton, who had been a collaborator with another great designer, Nonda Katsalidis. Together Nigel and I determined that we would design and build something really special; a cutting edge building that would make a statement. It would be a high quality building but more than any other single issue, it should be a great place to live.

There are many design issues in the Aurora that set this development apart from most others. Most are not obvious but they are there. For example, you will notice that almost every other apartment building of 60 metres (the general height limit in St Kilda Road) contains 20 storeys, but of course the Aurora holds 19 floors only. This is because we decided to put in higher than usual floor to ceiling heights. This of course gives each apartment an enhanced feeling of space and liveability, distinguishes the apartment design from the average and ultimately adds value and capital gain.

The balconies are larger than normal and built into the apartment floor plates rather than hanging off the edge of the building. This means you can actually enjoy your balcony living space rather than being hit by a full force gale or suffering from a sense of insecurity typical of most other apartment balconies.The development is of course air-conditioned throughout from a central plant rather than the unfortunately too typical cheap solution of an individual air-conditioning plant located on individual apartment balconies. All the details of Aurora's design are far too many to fully describe here. Together they create a superior living environment.
​
One of the very key issues in the design of a superior quality building is the type of construction used to build the development.
Most residential developments use a type of construction called "tilt slab' construction. This primarily means that the entire structure of the building is built up out of large tilt slabs of concrete. This type of construction is usually employed to lower construction costs. It also forces many compromises in the design. For example, in a typical, predominately tilt slab building, windows are usually smaller and are basically square holes in the middle of the slab, rooms tend to be smaller as the slabs need to be closer together to hold the building up, and there is usually complete uniformity of apartments through out the whole of the building, each apartment identical to the one above and below it. This creates the feeling of actually living in a box.
​
With the Aurora building we decided that we wanted design flexibility, to allow larger rooms, especially the open living rooms, large wall to wall and floor to floor windows and a much greater variety of apartment sizes. It's more like creating a vertical village, rather than the typical apartment building. This design flexibility required a different type of construction technique to the vast majority of "square boxes' built around Melbourne.

We therefore employed an "open engineered commercial construction". This type of construction is basically built around a central lift core with concrete columns and post-tensioned slab floors holding the building up. This allowed the amazing shape that the building took overall but most importantly, it allowed us to design much more interesting internal living spaces and a better relationship between the apartments and the unique views that each enjoys. Ultimately this again adds value and capital gain to your purchase.​
All of this requires extra expense but adds value in return. Most of all it requires more intelligent buyers and owners: you! The Aurora was designed from the very beginning to attract people who would recognise and appreciate a higher standard of design and building quality. People who would enjoy living here and in turn form a community  in themselves.
​
History of Site by Rick Aitchison
​582 St Kilda Road - History of the Site and Nearby

A friend, Peter, remembered 582 as being the work place for his first job in the 1950's. The offices were in a beautiful old house with a tennis court at the back and horse stables. There was a laneway at the rear and there was space in which cars could be parked. Peter had left school and got his first job as a mailing boy with 'Pink Pages' (the forerunner of today's Yellow Pages) who had their office in the building.

Another gent, Norman, contacted me and moved the story along into the mid-late 1970's. He too came to work at 582. His employer, the Urban Development Institute of Australia, had a couple of the top floors of the then eight-story office building. Phil Ruthven, social commentator and economist developed and applied his economic models from his bunker in the basement.

In her book "Melbourne's Grand Boulevard', Judith Buckrich indicates that in 1922 Victor Leggo lived at 582 St Kilda Road and was still here in 1939. In 1961 E.H. O"Brien Pty Ltd (advertising agents with ties to Pink Pages and Head Office at 414 Collins Street) were the listed owners.

Next door at 580 St Kilda Road was the headquarters of the Australian Services Canteen Organisation which had previously been apartments in the name of Mrs Vera Bruce. On the south side at this time (1961) was the Zionist Office and Cultural Centre. Prior to that the site was owned by Joseph Nathan.
​South of the Yarra
​
I was on the St Kilda Road tram when I started to pondering on how the south side of the Yarra might have looked since the mid 1830s shortly after Melbourne was established.

The young township would have been visible on the rising land on the north of the Yarra, upstream from the mouth of the river near the Falls, where there was a reliable source of fresh water. The south side of the river would have been flat and prone to flooding. It was more suited to cultivation and grazing of stock and the lagoons, predecessors to Albert Park Lake, would have swept across to the sea.

Small sailing vessels navigated up the then twisting Yarra to berths near where is now known as Elizabeth Street. The larger ships anchored at Williamstown. Freight and passengers came to Melbourne along the north side of the river.

In the early 1840s a ferry service at Williamstown was available and the shorter track, on the south side was established through the marshy plain to the punt crossing at Melbourne (about where my tram is now going over Princes Bridge) Then during the Gold Rush Era of the 1850s and 1860s a makeshift, tent township sprang up on the south side of the river with the huge influx of new arrivals from the colonies and overseas. Being flood prone and vastly overcrowded it was not well suited to permanent occupation. The land here was cheap and well located to Melbourne so after the Gold Rushes, in 1870s and 1880s, factories and housing for the workers were established. After the 1890s 'depression' and through to 1920s the area south of Melbourne prospered with the combined growth of industry and population, with housing and recreational facilities expanding.
​
It is only in recent times that the factory buildings on the very edge of the Yarra have disappeared. The bluestone remains of the wharf area can still be seen and it is not so hard to try visualise the old scenes.
​
As the tram bell 'dings' and we move off, I wonder what the Grand old Railway Station is thinking as it watches from its prominent vantage point across the river. What are itís thoughts, silent opinions and contemplations of all those changes it has seen over the years. What of things as they are now - the Southbank complex, The Casino, the Arts Centre, Federation Square and the Gallery? What changes will the future bring?